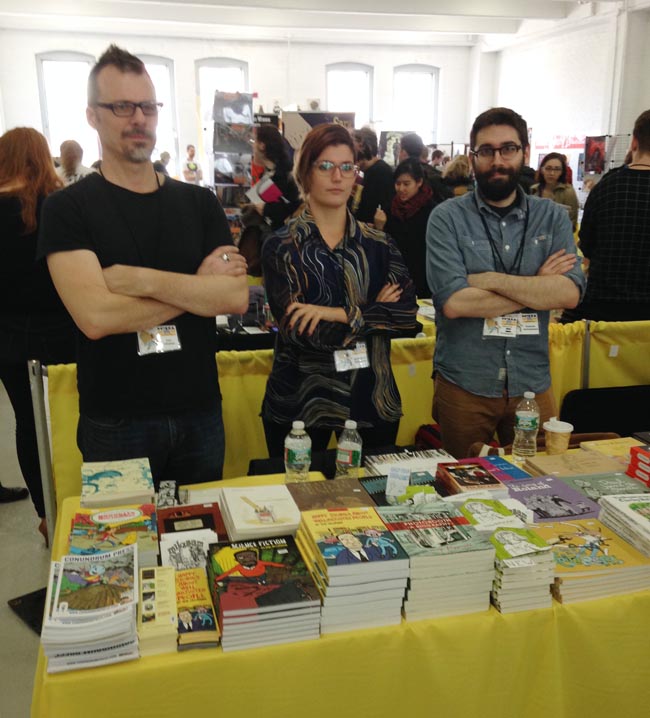 48 hours in New York City! Just back and the snow is finally beginning to melt in Nova Scotia. Friday night met Joe Ollmann in the Toronto airport where we caught up, ate veggie burgers, and planned the new Conundrum documentary film company. The ever hostful Corey Frost (who is familiar with airports) picked us up and took us to his neighbourhood of Jackson Heights in Queens, where the South American community meets Little India. Obviously there is great food. The next morning he graciously drove us through Manhattan traffic, loaded down with boxes of books.

And we found the new venue for MoCCA Fest in Chelsea. This was their first year in this venue and it was three floors plus a rooftop patio and was bright and airy. Right away I had an Art Spiegelman moment when I helped him with a trolley of books get into the elevator. I felt officially in New York. Then it was arm crossing time, as is our want.

Pictured here are Joe (“The Alice Munro of Comics”), Kat Verhoeven, and a bearded Dakota McFazean. Joe’s Happy Stories About Well-Adjusted People, an omnibus of his stories came out last Fall. It was my first time meeting Kat and I discovered she is a real pro at handling a merch table. We had preview copies of her fabulous Towerkind. And speaking of previews, we had the printer in Singapore courrier a few copies of Dakota’s new collection of Dailies, which glowed in all the natural light. But Dakota was all over the place, having a new mini, and a new issue of Irene, which he co-edits. We must fear the beard.

Speaking of prolific Canadian cartoonists Joe gets caught up with Michael DeForge.

There was a small exhibit on the second floor. The art of Jonah Kinigstein blew me away.

Here he is at the Fantagraphics table. I must point out that I got to meet Fantagraphics legendary publisher Gary Groth this weekend. Groth is an inspiration to humble publishers like me.

Jillian Tamaki is having a big year. Here she sells out of the latest edition of Frontier which features her story SexCoven. Youth in Decline Publisher Ryan Sands makes the sale. And of course Jillian published her first book with Conundrum, Gilded Lilies. While we chatted and got caught up at the Conundrum table she signed copies before they were all gone.

Meags Fitzgerald made the trip down from Montreal. Here she is with Kat showing off their books.

Our neighbours for the fest, and also our Square saviours, the Irene crew. All day it was, “Can you spare a square?” jokes. Now that I have a real phone I will get me one of those plastic doohickeys to take the plastic. Thanks to co-editor and cartoonist in his own right Andy Warner for all the help. What a fine looking table.

And of course Dakota stops for nothing! Here he is the first day doing his daily comic. Oh and if you want three years worth of Daily comics you can now get that too…

Had to take a walk down the block and noticed the Highliner pathway but could not find the stairs to access it. While searching I stumbled upon the famous Printed Matter bookstore!

Back to selling and look who shows up? Elisabeth Belliveau to sign her appropriately titled One Year in America. One weekend in America was more like it. Here she is with Meags.

At the Toon Books table I had another Spiegelman moment. Here is Nadja Spiegelman signing the copy of Lost in NYC: A Subway Adventure I bought for my kid, and next to her is Spanish illustrator Sergio Garcia Sanchez.

Then day one was over. The gang strolled the streets Lost in NYC looking for the subway adventure, to get to the after party at the Society of Illustrators across town. As we walked I spotted the Chelsea Hotel under construction…

I am currently reading Sherill Tippin’s book Inside the Dream Palace so I know this is where Dylan wrote Blonde on Blonde, Warhol made Chelsea Girls, Leonard Cohen got head on the unmade bed, and so much more happened. But I needed to pee so we carried on.

Finally we made it to the Society of Illustrators for the after party. Even in the bathroom incredible art was hanging. There was free beer and free food but it was the art which was the highlight for me and Joe.

There was Kirby, but also Windsor McKay, Harvey Kurtzman, so many old time artists. This was a cartoonist’s paradise.

Downstairs was the Museum of Cartooning and Comic Art, the MoCAA of the show. There was an Alt Comics exhibit, featuring strips from the alternative press through the 60s-90s.

Canadians and Conundrum (Nog a Dod) were represented by Marc Bell whose work I remember from the day in the Montreal Mirror.

And here is Meags posing in front of an original Joe Shuster Superman. More Canadians!

Day two was lovely weather and I discovered there was a rooftop patio. Here is the view.

Kat signs Towerkind and I discover she made patches! Here a fan already has one on display.

Joe chats with another talented Canadian, Rebecca Roher, at MoCCA with her comics at the CCS table where she is going to school. Her latest comic in the Nib is awesome.

Kat is interviewed by Heidi Macdonald for The Beat.

Joe and I had to leave a bit early to catch our flights so I grabbed a book for the plane. So glad I picked up Sean Ford’s Only Skin from Secret Acres. It was really amazing and kept me on the edge of my Delta airlines window seat. Everyone should seek it out.

Conundrum Press is located in Mi’kma’ki, the ancestral and unceded territory of the Mi’kmaq People.

Due to an unexpected website issue, we are not currently able to fulfill orders through the Conundrum Press website. Our books are widely available from indie bookstores, comic shops, and chain stores!